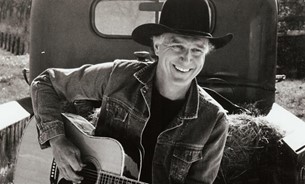 The old desperado is gone. Jerry Jeff Walker, suffering from throat cancer, passed away on October 23 at age 78.  We won’t see his like again.

Walker, or just plain “Jerry Jeff” to his many fans, was a folk singer who honed his craft in Greenwich Village in the 60s and wrote perhaps his best known song, Mr. Bojangles, after spending a night in a New Orleans drunk tank. The song was covered by a number of performers, including Bob Dylan, and helped launch Jerry Jeff’s career.

That song also displayed some characteristics that marked a number of other tunes he recorded during a career that lasted more than 50 years—a poignant sense of the transitory nature of our lives mixed with a joy for living that was second to none.

Nobody could say Jerry Jeff didn’t like to have a good time.  That winsome grin of his told stories of its own.

He made his big personal and professional move when he came to Austin in 1971. He was certainly the only New York import I can think of that Texans of the time actually approved of.

It was a time of musical ferment.  Willie Nelson left Nashville to make music his way in Austin, and the wave of musicians who landed on the banks of the Colorado in the Texas state capital created something new, something that came to be called “outlaw country.”  It was raw and fresh, a sound created far from the corporate board rooms of the music business, distant from the heavy orchestration of what had been called “the Nashville sound.”

People like Jerry Jeff, Waylon Jennings, Nelson, and many others revitalized country music.  Call it “outlaw” music or “progressive country,” or “Texas music,” or what have you, it was authentic, and it was American.

No less an authority than Asleep at the Wheel’s Ray Benson, who was very much a part of the 70’s Austin music scene, has said that Jerry Jeff was, apart from Willie Nelson, “the most important musician” in town at the time. He not only wrote his own songs, he popularized the work of other important songwriters like Ray Wylie Hubbard, Rodney Crowell, Townes Van Zandt, Michael Martin Murphey, and Guy Clark.

Jerry Jeff’s smoky, boozy voice belted out rollicking favorites like Ray Wiley Hubbard’s Up against the Wall, Redneck Mother, cracked during soaring runs in his great good time anthem Sangria Wine, and whispered to us of the fleeting nature of our lives in songs like Guy Clark’s Desperados Waiting for a Train and his own powerful composition, Wheel, inspired by the scene of an accident that killed Jerry Jeff’s grandfather when he was a boy of 15.  Gary P. Nunn’s London Homesick Blues became the tune all of us young Texans in that era had running in our heads when we were far from home:

I wanna go home with the armadillo

The friendliest people and the prettiest women

Backed up by his Lost Gonzo Band, of which Nunn was a member, Jerry Jeff’s signature album was 1973’s ¡Viva Terlingua! (All of the songs mentioned in the previous paragraph are on that album.)Recorded live in Luckenbach, Texas, the album covered everything that Jerry Jeff and his band had to offer.  Light-hearted, whimsical joy, lamentations, and wistful memories.  All of it was on that record (You can listen to the album here).  One minute, you might think Walker and his band were too loaded to go on, and the next Jerry Jeff spoke softly to us like a Hill Country bard.

A particular favorite of mine is Jerry Jeff’s rendition of Desperados Waiting for a Train.  The song begins with a fiddle playing Red River Valley.  As is so often the case in country music, Desperados is a story song, the story of boy and his relationship with an old man, a man the boy sees as “one of the heroes of this country,” a man who teaches the boy about life and death.

The man ages and fades as the boy grows up, the two of them waiting for the train they know must come someday for the old man and for us all:

A day before he died, I went to see him
I was grown and he was almost gone
So we just closed our eyes and dreamed us up a kitchen
And sang another verse to that old song
“Yeah, Jack, you know that son of a bitch is comin’ “

There is so much more I could say about Jerry Jeff, so many more songs worth mentioning. They are all out there, waiting for a new audience.

He was a hard living, wild and wooly original.  Ray Wiley Hubbard once told his friend, “I never thought I’d live long enough to see you live this long.”  But now, the old desperado is leavin’ Texas for the last time.

We’ll miss you, Jerry Jeff.  The train has come and gone.

Wayne Allensworth is a Corresponding Editor of Chronicles magazine. He is the author of The Russian Question: Nationalism, Modernization, and Post-Communist Russia, and a novel, Field of Blood.

Jerry Jeff and the Lost Gonzo Band perform Desperados Waiting for a Train: